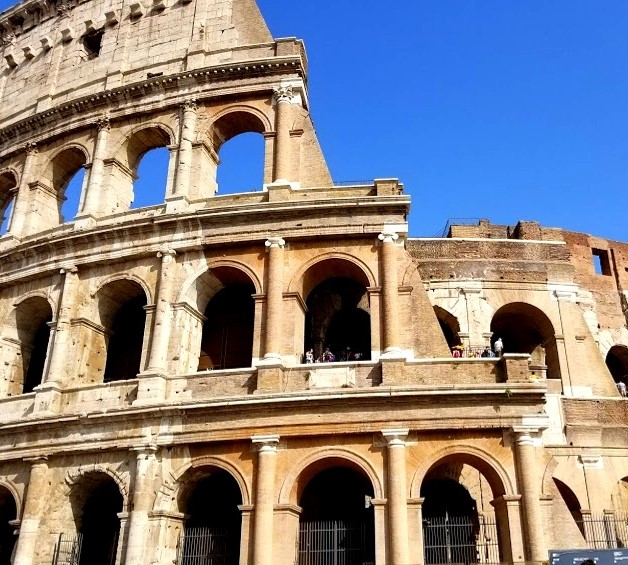 We know the saying, ‘You can’t do Rome in one day’, but sometimes that is all you have. One day.

This happened to me on my latest international trip. Within only two weeks, we traveled to five countries and seven cities on our European backpacking extravaganza. While it was a ton of fun, I can’t even begin to explain the amount of exhaustion that came about after this trip. But you know, we didn’t die so I’d certainly call it a success.

To be honest, I highly recommend spending a few more days in each location rather than trying to cram in as much as you can see in a day or two. Since we are both fairly young and flights from the United States to Europe can get pricey, we did the exact opposite.

I think we literally walked twenty miles each day and had several days of not sleeping at all. But mild bickering and moments of insanity aside, this was a trip of a lifetime.

When traveling with no time and on a budget, you have to prioritize what you want to see and do.

Rome is filled with extensive histories, dramatic architecture, alluring art, and rich culture that cannot be missed. I mean for goodness sakes, it’s Rome! So much of today’s world’s culture has originated in this buzzling city.

Not only does Rome host one of the world’s greatest ancient civilizations, Rome surrounds the hub for one of the largest religions in the world at the Vatican.

Whether you are Catholic, another religion or non-religious, I find great value in exploring religious institutions all over the world. The sheer influence of this religion throughout human history makes this a stop that you don’t want to miss.

Not to mention, the level of ornate art within religious architecture will completely blow your mind. It was really cool to see the Michelangelo’s art all throughout the Vatican.

So how does one best capture the essence of Rome in one day? Well here is what I did.

We started our day in Friendship Place an affordable hostel near Termini Station. It was cheap, easy to find, and staff was great. They even gave us an upgrade!

This was also handy to access all of the public transportation that we needed. Much like anywhere in Europe, utilizing public transit is a great way to get from point A to point B. It’s not impossible to walk but I recommend saving your legs for actually exploring sites. You’ll need it.

Our hostel gave us a ticket to grab a small bite before heading out at a local coffee shop. For anyone reading that is American, know that you don’t sit at these coffee shops since they often charge more for a seat. You generally grab an expresso, grab a small croissant, and head out your way.

As an American, I’m used to bigger breakfasts and fuller coffees, but you get used to it. Think of it this way, you can always eat more through out the day and the food in Rome is to die for. Best to keep your appetite for later.

There was a cute little market set up by the coffee shop too. As a backpacker I wasn’t looking for any clothes at the moment, but I did briefly check it out. I love checking out little make shift markets. 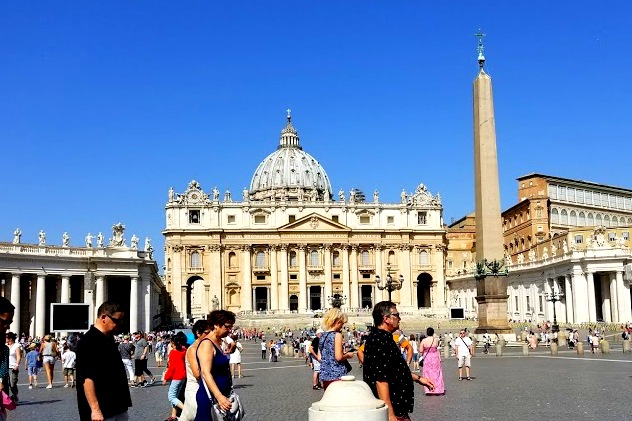 Well, given advice from our guidebooks, we decided to head over to the Vatican in the morning. Since we didn’t have as much time and money, we skipped the guided tour and just headed out to St Peter’s Basilica.

There was a wait, but we didn’t mind. You can skip lines and see more by buying a tour but given that this wasn’t our only stop for the day, we decided not to.

Just for a bit of advice though, make sure you have skirts below your knees or pants, and something to cover your shoulders. This is a house of worship and not only is it the rules to get in, it’s simply respectful. I’m not Catholic myself but I am not rude when I am visiting someone else’s religious palace.

Given that it was August and a million degrees out, with humidity, I opted for a convertible maxi skirt that I can change to a tube maxi dress once we left. I paired this with a light white tee with sleeves that could easily fold into my bag when I left.

Given how much of a priority the Vatican is for you, you can give yourself more or less time here than we did. I do believe that you should try to catch at least a glimpse of it when you are in Rome. It is worth it.

My only regret with the Vatican is that we missed out on the Sistine Chapel in the Vatican Museum. If you do the tours, this is a lot more possible for this visit. However, we had one day and a limited budget so some things needed to be skipped.

Next, we grabbed a quick bite to eat and headed back to the hostel to recover.

I’m not going to recommend where we ate for lunch because it was quite forgettable. It was somewhere near the Vatican and felt fairly touristy. We were starving so we just bit the bullet. Generally, when travelling, I try to avoid the places near the tourist destinations and with pictures of food at the entrance. Even better, I try to keep a list of places I looked up first. For dinner, we did that.

We thought about renting a scooter but decided against it. It was a bit pricey and we didn’t have too much time. Not to mention, I generally hate everything to do with driving. Thank god Europe is based more on public transit.

Instead, we decided to grab some gelato by the hostel to cool ourselves off and take a break before heading over the Colosseum. 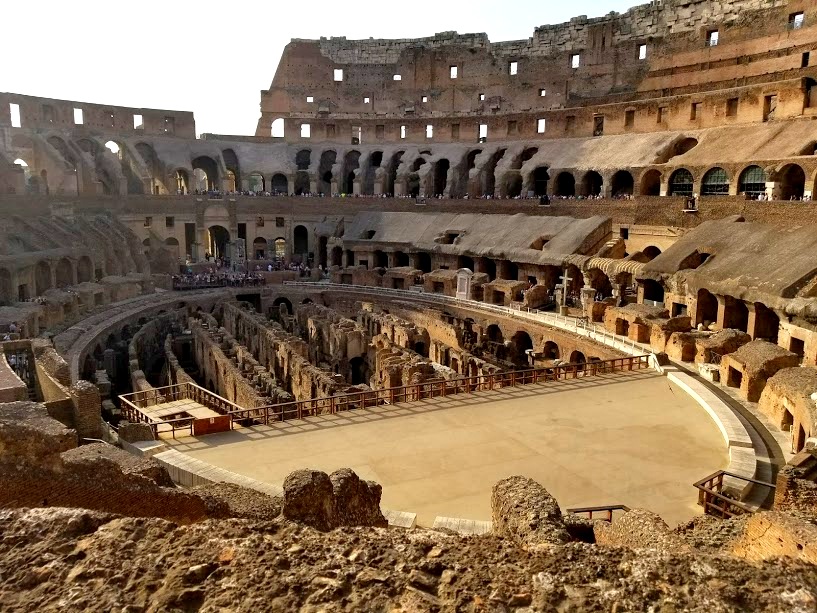 We read that the Colosseum is less crowded at the afternoon near when they are closing, and boy were they right. We waited in line for a mere 15 minutes to get in.

In addition, you can check out the Arch of Constantine prior to heading in. 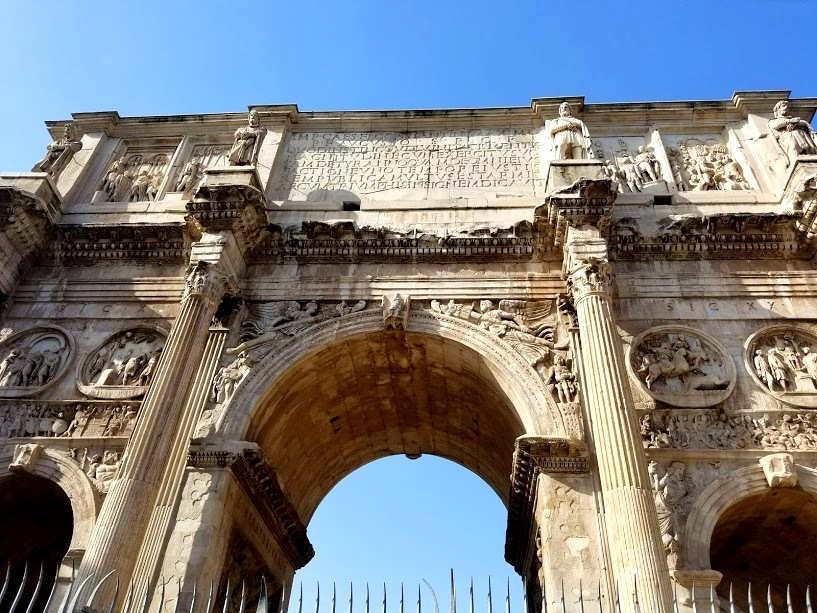 Much like with anything, you can get a more extensive look if you do the full tour. Booking before hand gets you the best deals too. However, we also mostly wanted an overview, so we skipped the tour and checked it out for an hour or so on our own.

We did avoid taking any pictures with dudes dressed up as gladiators. Like most photo gimmicks, they can overcharge for a mediocre souvenir and can be quite pushy. I saved the pictures for the Colosseum anyways. I mean anyone can dress up right?

Now we ran out of time to check out the Roman Forum, but I did hear from other travelers that it is awesome. Next time, I hope to check it out. 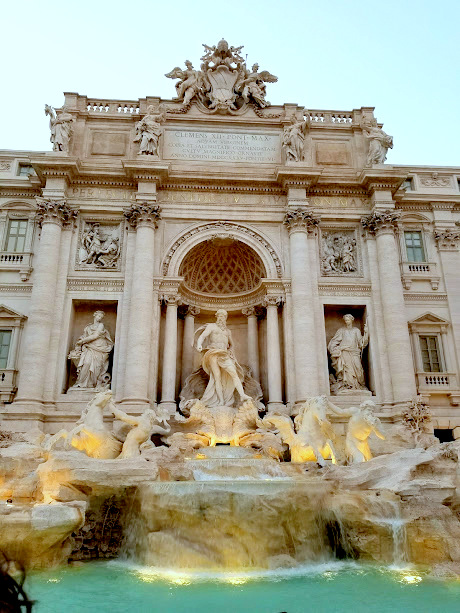 As the sun began to set, we transitioned to our evening adventures. We headed back to the hostel to rest our legs, change, and grab a drink before jumping back on the metro to the Trevi Fountain.

Given that it is the evening, Robb, my fiancé and I figured it was time to switch from cheesy tourist mode to romantic lovers’ mode. (I know, lovers is such a cheesy word but we got engaged a few months before this trip, so love was definitely on the mind.)

So, what says romance more than the famous Trevi Fountain? We zipped on over, took our pictures and headed out to dinner. To be warned, the fountain is quite crowded. Given that this is a tourist destination, we were prepared.

We did make the mistake of paying someone to take or picture. The picture didn’t work. It was 5 bucks for a Polaroid of us with black in the background, no fountain. It sure made us giggle though!

Well, as I mentioned earlier, we did go somewhere great for dinner. Near the fountain, several restaurants boasted the greatest meals in town. However, only a few really deliver.

When travelling, it’s best to do some research on food prior to heading out. I like to make a good list of a few places with high rating within my price range, so I am not caught off guard when searching for food, even if the place I was planning on doesn’t work out. 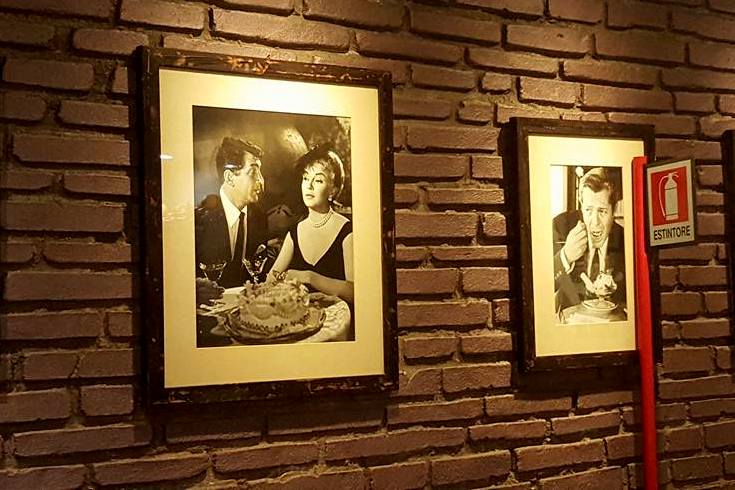 One of the things I look for when searching for meals in touristy areas is if there is someone begging you to come in or people waiting in lines to be seated. This one was the later.

While other restaurants had people yelling at you to come in, That’s Amore had a good line out the door. While we were a bit discouraged by the line, we decided to wait only to learn that it was a 20-minute wait.

In Denver, people wait hours for brunch. I know, it’s crazy. Even a place like Chili’s might have a half hour wait. It was definitely worth the time.

Plus, it’s Italy. You’ll spend a good few hours eating anyways so you want to be somewhere good. This place had a wonderful romantic atmosphere, delicious food, great service, and the best mozzarella I’ve ever had. My mouth is watering thinking about it now.

If I’m going to spend hours in a restaurant and quite a bit of money on food, I want it to be worth it. This was worth it.

As the night came to an end, we headed back to the hostel. Yes, we could have gone to a bigger party district, but we were beat. We did grab a couple drinks at a small shop near the hostel, but I was DONE walking.

Like most hostels, there were plenty of young adults hanging out drinking, making the night livelier than I was expecting, and the hangover a bit rougher in the morning.

So, there we have it. Here is how I spent my day in Rome. Have you been to Rome before? Where would you go if you only have 24 hours? Let me know how you would do Rome in one day in the comments below! 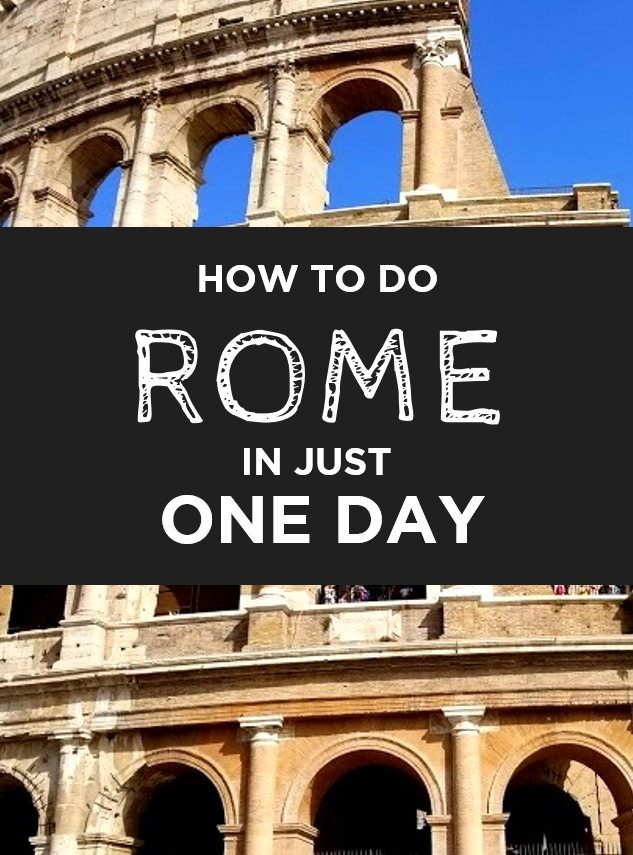 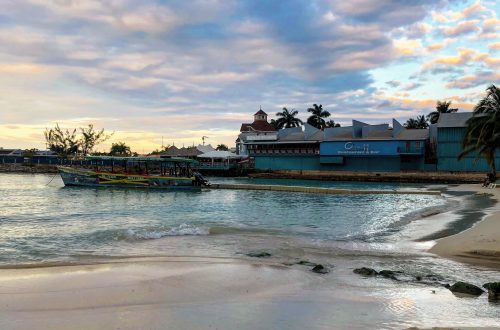 What you should know before your first trip to Jamaica

Melanie Young | #Denver travel blogger with a passion to adventure to new places and explore the #outdoors. #nature #colorado #travel

My favorite pic of me from my Crested Butte campin

I mean who wouldn’t be obsessed with this view?